Right now, governments have little option but to treat their finances like a bottomless cup of coffee, adding trillions to already overwhelming debt burdens to minimise the damage done by the Covid-19 pandemic.

Financial support for vulnerable businesses and populations are justifiably the priority for now, but at some stage, governments are going to have to pay the bill – and the total amount owing promises to be staggeringly high.

The US government is considering another $2-trillion fiscal package and the European Commission’s Recovery fund proposal is up for discussion this week. At home, Finance Minister Tito Mboweni is looking at creative ways to cope with South Africa’s planned R500-billion fiscal package when International Monetary Fund (IMF) funding is not a guarantee. One of his options, he told Parliament on 12 June 2020, could be the introduction of zero-based budgeting when he tables a Covid-19-adjusted budget later in June 2020.

Governments’ indebtedness is ratcheting up monthly and it doesn’t help that most countries went into the crisis with already stretched, and, arguably, unaffordable debt burdens that they already urgently needed to bring down.

To get an idea of how fast-moving the pace of fiscal stimulus is at the moment, the IMF had to update its graph below, which keeps track of government stimulus programmes during the pandemic. The upward revision included the second wave of government measures that happened after the release of its April 2020 Fiscal Monitor. These included the $483-billion package announced by the US government in late April 2020 and Japan’s $83-billion support to households in the second half of April. France and Korea also extended transfers to support households. 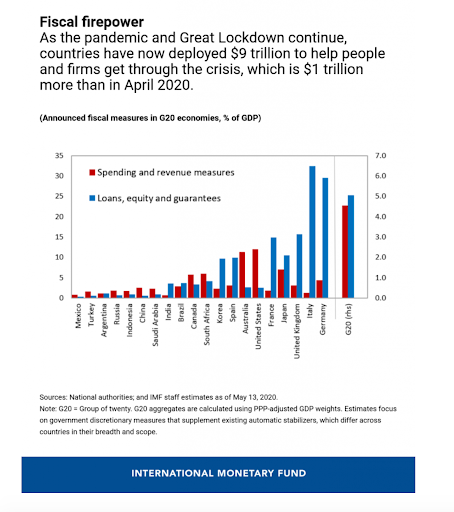 The Financial Times now puts the developed economies’ government debt burden as a result of Covid-19 at $17-trillion. Pew Research quantifies total US federal debt as more than $24-trillion.

The IMF points out that the Group of Twenty (G20) advanced and emerging market economies account for the bulk of the global financial support and that G20 stimulus measures comprise 4.5% of GDP – more than the fiscal packages introduced during the global financial crisis.

These measures are adding to the steady upward trajectory in debt levels since the Great Recession. According to Pew Research, debt as a share of GDP in the US rose from 64% of GDP in 2006 to more than 100% in 2012 and thereafter. The increases in government debt burdens as a percentage of GDP in the G7 economies are captured in the graph below. 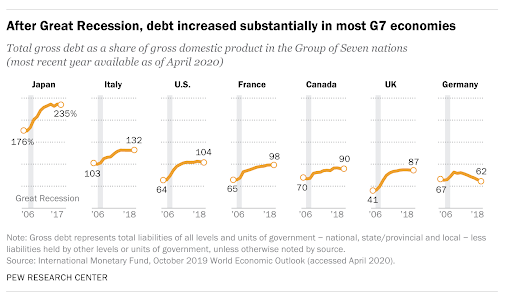 In the US, multi-trillion-dollar government relief plans are expected to see the federal debt-to-GDP ratio rise to its highest level ever by the end of the 2021 fiscal year against a backdrop of a sharp contraction in the US economy. During the first quarter of 2020, the US experienced its steepest decline since the financial crisis, sliding 4.8%.

An even larger decline is expected in the second quarter of 2020, which will add to the financial constraints the US government is facing during the years ahead. “At the same time, the relief plan is also likely to help stave off worse economic conditions, and because interest rates are low, borrowing is cheaper than it might otherwise be,” according to Pew Research.

The IMF also finds cold comfort in the fact that low-for-long interest rates will ease some of the funding pressures on government finances and, in fact, believes these lower rates “present an opportunity for quality public investment across the world to boost growth”. Recently, IMF Managing Director Kristalina Georgieva recommended governments “use fiscal stimulus wisely” as one of three priorities in achieving an inclusive recovery. The others were empowering the next generation through education and harnessing the power of financial technology.

The IMF Fiscal Monitor also refers to the sizable increase in deficits this year as “necessary and appropriate” for many countries, but adds that with global public debt at 83% of GDP in 2019, “the starting position in some cases presents vulnerabilities”. Emerging markets and developing economies that face multiple shocks, including the pandemic, difficult financing conditions, weak external demand and lower commodity prices are particularly vulnerable, it points out.

South Africa undoubtedly falls into this category and Goldman Sachs, in a recent paper on emerging markets dealing with a post-Covid-19 debt overhang, pinpoints South Africa as one of six countries that “will likely need to make especially painful adjustments relative to the projected 2021 outcome”.

The authors, Kevin Daly, Tadas Gedminas and Clemens Grafe, from the bank’s Global Macro Research department, say the large estimated adjustments for South Africa and Kenya would be a result of the relatively loose fiscal policy the countries followed over the past few years. Other countries on its list of countries facing a tough time ahead include Saudi Arabia, Nigeria, Brazil and Ghana.

Comparing the outlook for developed countries with high government debt burdens versus emerging market countries, Goldman Sachs says: “Developed economies also face this prospect, but are more likely to be afforded the time to make these adjustments and to do so while maintaining low borrowing costs. By comparison, emerging market economies are more likely to struggle to fund their increased borrowing needs at low rates, especially in a world where all governments are attempting to borrow much larger sums.”

The IMF recommends that overly indebted countries reprioritise spending towards the healthcare sector and safeguard key public services and social protection. It adds: “The size of the impact of Covid-19 on public finances is highly uncertain and will depend not only on the duration of the pandemic, but also on whether the economic recovery is swift or the crisis casts a long shadow.”

Perhaps Mboweni’s suggestion that the South African government start from scratch when it budgets for the next year or so is a good one. He foresees prioritising infrastructure investments, which are generally seen as the most promising way of digging our way out of this economic meltdown and, hopefully, building an economy that is growing fast enough to enable the government to pay its bills without breaking the bank.